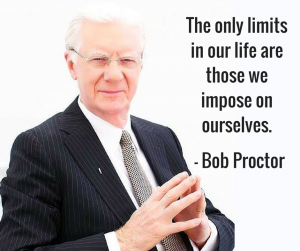 Bob Proctor is a leading self-improvement and self-help guru best known for his involvement in the movie The Secret. Bob is a proponent of the Law of Attraction and Law of Vibration and has spent the vast majority of his teaching career lecturing on this subject. Best known for his best-selling book You Were Born Rich based on the writings of Napoleon Hill.

Of all the self-improvement gurus out there Bob Proctor is my favorite because of the way he teaches and conveys information. Through a combination of personal stories and history lessons, he explains the Law in a way that the average person can understand. Bob Proctor was featured in the movie The Secret which helped bring the concept of the Law of Attraction to the mainstream.

The philosophy espoused throughout all of his teachings is based around the Law of Vibration which states that nothing stands still, and the world is constantly in motion. Your body is constantly vibrating and the rate and speed of this vibration largely determines the results you see in life. Vibration, which is the basic building block of the Law of Attraction, is either in a negative or positive state.

The laws of the universe say that you are attracted to people and things that vibrate at a similar rate. Bob teaches that in order to accumulate vast sums of money you must use the Law of Attraction and Vibration to your advantage through affirmations and positive thought claiming these laws have been the primary source of Bob’s success in business and life. In fact, if you study the teachings of all great leaders throughout history they have used similar techniques to achieve greatness.

The power of the mind should never be understated. I was recently reading a book called The Science of Getting Rich where he talked about the mind as producing a “thinking stuff” that when held in total desire will translate into its physical equivalent. This concept was hard for me to grasp at first until I realized all self-improvement coaches are speaking about the same concepts in their own unique way. Essentially, when you hold an idea in the mind with complete desire for its manifestation into reality, it triggers your subconscious mind to begin creating the best possible route for its manifestation into the physical world. Bob refers to this as the Law of Vibration, while other gurus have their own name for it.

If you study successful business leaders the two traits you will notice they all have is complete confidence that they will succeed and a tireless desire to make it happen. Study the life of Bill Gates, Donald Trump, Henry Ford, or any of the largest capitalists of our day and you will see these qualities. Bob Proctor tells us this is the primary reason for their success.Over the years,

Over the years, Bob has authored many other successful books including:

The biggest takeaway I learned from Bob’s teachings is the concept of affirmations. An affirmation is a phrase or sentence that is repeated over and over both aloud and to yourself. The intention of this process is to program the subconscious mind into taking on the characteristic of the affirmation. One of the affirmations that Bob teaches is as follows:

“I’m so happy and grateful that money comes to me in increasing quantities, from multiple sources, on a continuous basis.”

This sentence is meant to be repeated both verbally and in your brain consistently. The purpose is to essentially program your subconscious mind into taking on the characteristics of the affirmation.

The process of programming the subconscious is a slow and tedious, which is why the majority of people give up before they begin to see changes. Think of it this way, you subconscious mind has been programmed since you were born, and it’s going to take a long period of time to re-program it to serve you in every way.

The other reason people fail with affirmations is because they don’t add emotion or feeling into they practice. Studies show that what you give emotion too will become dominate in your life. If you want affirmations to succeed, you need to add feeling and emotion behind them at least part of the time This process will accelerate the pace of change in your life. Bob also teaches us the importance of taking risks and getting out of our comfort zone. If you want to grow as a person you can’t just play it safe in life. In fact, the process of being uncomfortable and working through the process the quickest way to grow mentally and physically.

Here is a great giveaway, I used to have a very low self-image and I was told in my coaching to watch this video every day for 90 days. I did and my confidence starting going through the roof, I wasn’t even sure why specifically but it helped. Here is the video I used:


If you ever feel yourself becoming comfortable then it’s time to move to the next level. If you are truly ready to excel at life, you should work to be comfortable in uncomfortable situations. For most, this will be very hard at first but with practice, you will learn and grow. Bob focuses primarily on increasing your wealth and income, but in order to do that one must break their old paradigms of what’s possible.

One of the first questions Bob asks new students he’s training is how much is the most money you’ve ever made in a year? The reason he asks this specific question is not because he cares, but because that’s the paradigm they must break through. In his coaches, he constantly reminds us that we can achieve anything we want in life and the only thing holding us back to greater wealth, health, and happiness is our self.

Recently, Bob has released high successful self-improvement courses including Magic in Your Mind, Six Minutes to Success, and the Bob Proctor Streaming Club. Bob has been one of the biggest reasons for my success in life and I highly recommend all his products, books, and services.