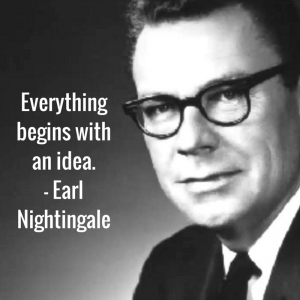 Earl Nightingale was an American-born public speaker, self-help coach, and radio personality. Earl’s most famous work was called The Strangest Secret, which is an audio book that delves into the fundamentals of the Law of Attraction. In fact, this audio book was the first self-improvement work ever to sell over 1 million copies! Like almost all other great success coaches, Earl taught that we become what we think about, therefore personal development should focusing on correcting thinking first. I was originally drawn to his work because I liked the sound of his deep and confident voice, but as I listened to his message I realized his teachings were amazing as well. Legend has it, that a young Bob Proctor got to work with Mr. Nightingale for a long period of time which Bob says transformed his life. Earl claims his big breakthrough came in fall of 1939 when he was just 29 years old. He was reading Napoleon Hill’s book Think and Grow Rich when he suddenly came to the realization that he had be searching for his entire life. At this point he had the surreal realization that, we are what we think about, or put another way, “As ye sow, so shall ye reap.” Earl knew that the secret to success in life, health, wealth, or any other area had to do with the dominant thoughts in your brain. It’s important to note, that thinking alone is not enough for success, one must think and then combine this thinking with bold determined action. The entire chain reaction is initially started and directed by the thinking mind. In Napoleon Hill’s book Think and Grow Rich he talks about the secret to success that is mentioned no less than one time per chapter. I read the book through multiple times before I ever figured out what this secret was. Initially, I found it very frustrating that Hill didn’t just reveal this secret to you at the beginning, but behind this tactic was definitely a reasonable approach on how people learn best.

The audio record “The Strangest Secret“, was a worldwide success when released in 1956. Based on the concept of your thinking creates your reality, Earl breaks down how fortunate we are to live in America, and how all able-bodied men and women should be chasing their dreams. The audio book starts with Earl breaking down how few people actually succeed in reaching their dreams, goals, and aspirations. In fact, studies show that very few people even have a worthy goal, and instead just move through life trying to “get by.” Mr. Nightingale goes through the statistics and reveals that only 5 out of 100 people will achieve any measurable amount of success in life, and even less, just 1 in 100 people will ever become rich. This number is strikingly small for a country and wealthy and successful as the United States. Furthermore, it’s highly possible that the United States is currently the riches and wealthiest country ever in the history of earth, and in no time throughout history has anyone had more opportunity to become wealthy. So the question remains, why don’t more people pursue this worthy goal? In the beginning of The Strangest Secret Earl defines what it means to be successful as “the progressive realization of a worthy ideal.” He goes on to say how he believes that the biggest problem in today’s society is “conformity” and how most people seek to act like everyone else.

If you really want to get ahead in life, you can’t do things the same way as others have. Instead, you must “reinvent the wheel” by building on the works of those who came previously, while innovating and taking it to the next level. The fact of the matter is a large majority of people are broke by the age of 65 and live out their golden years dependent upon others. Most people believe that their life is shaped by external events and circumstances that they have no control over. These external forces are at work because of no fault of their own, and are the real reason for their failures. He then goes on to talk about the importance of setting a worthy goal for yourself. This goal must be congruent with your core beliefs and be worthy of your full devotion and effort. In fact, Bob Proctor recommends people set very large goals that both excite them and scare them at the same time.

Furthermore, setting a very large goal means that even if you fail, you are boldly moving forward in the correct direction. He cleverly makes the analogy of a ship taking off on a voyage. One ship has a crew and captain directing them to a specific location, while the other has no captain or crew and simply sails off into the big blue ocean. If you had to guess, which ship do you think will reach its destination? It’s obvious that the ship with the captain, crew, and specific destination will have a much higher probability. So why not apply this concept to your life goals? The first step is to think deeply about a very worthy goal, then once decided upon put your full brain focus and physical effort into its attainment. Remember, no worthy goal will be accomplished immediately with little effort. If one truly wants to reach the highest heights of success your going to need to be persistent even in the face of failure. The key to success is to focus your brain power and thought patterns on the attainment of your goal.

As you delve deep into the law of attraction you will find the secret to everything is your thinking. In fact, all great religions, thinkers, and philosophers have only one thing in common. Do you know what it is? If you guessed that you are what you think about, then you were correct. It’s important to note, that it’s not possible to wish for 100 different things and obtain all of them. Furthermore, different goals require smaller or larger amounts of effort for their eventually attainment. The Law of Attraction is best applied when you pick one goal, and focus exclusively on its attainment for the required amount of time.

If you love Earl Nightingale, then be sure to check out Wayne Dyer and his direct student Bob Proctor as well.