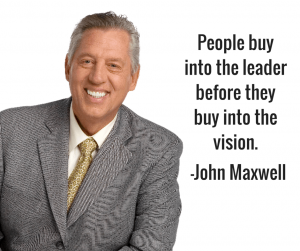 John Maxwell is one of the most popular speakers on the subject of leadership in the world today. In fact, John has made a career out of traveling around and speaking to large crowds of people. His focus is primarily on leadership training and the qualities that all great leaders embody. John often talks about the two greatest days in a person’s life which are, the day they were born, and the day they discovered way. John believes that to truly live we must have a “Purpose Driven Life” and our daily actions should reflect our big picture purpose. I was first introduced to John Maxwell during the Leader-cast Even held in my city every year. Leader-cast is a live event that takes place in Atlanta Georgia every year but is streamed across the world to thousands of venues. John’s teachings focus on creating leaders and he breaks down the values that are important to be successful. One of the biggest takeaways from is his work I had was the importance of setting up a daily routine. In fact, John says the secret to success for a leader comes down to their daily routine. Furthermore, almost all successful people are early risers and accredit their early morning routines for their success. This is hard for a lot of people to hear, but getting up early with a routine, sets the framework for the rest of the day. One also has to consider the implications on your physical body when you don’t sleep with the natural cycles of the earth. For centuries cultures have preached the importance of rising with the sun and sleeping at night. In fact, studies have shown that sleep between the hours of 10pm-4am is better then sleep during other times during the day. When you add up all the benefits of going to bed early and rising early one should recognize that this habit alone could give you the edge.


One thing you can say about John Maxwell is he has definitely found his purpose. While watching his speeches, you will notice that he comes alive on stage. He has a huge passion for public speaking and it definitely comes across during his presentations. Furthermore, it is no secret to anyone listening that he is a devout Christian, and often refers to the lord throughout this teachings.

During one lecture I remember John speaking on the differences between leaders who develop other leaders and leaders who develop followers. During the speech he breaks this down into great detail, but the main points were that leaders who develop followers need to be needed by their staff and employees. On the opposite end of the spectrum, leaders who cultivate and develop leaders want to be succeeded and eventually replaced in their role. In fact, the sign of a true leader is someone who can develop a system so powerful that they can eventually replace themselves. The difference between these two people are as far apart on the spectrum as you can possibly be. The question you have to ask yourself is this, would you rather be led by someone who wants you to become the leader or who wants you to need them. Studies show that almost all employees prefer to be led by someone who wants them to eventually become the leader. Most competent employees do not need a boss reminding them of their job description on a daily basis, and in fact, this can be counterproductive to your ends. John teaches us to strive to become leaders that inspire success and greatness around us.

John is he is the master of connecting with people. Along with finding your purpose, he teaches people how to connect with others. The key is to identify and relate to people in such a way it increases your influence with them. When we do this correctly, we are able to instantly create a connection with people. When we do this incorrectly, we end up only exasperating our differences with others.

John breaks down connecting with others in 3-simple principles:

It’s All About Them – Connecting with others is not about me and it’s not about you, it’s about the person you are connecting with. In other words, if you will help people first get what they desire, then they will help you achieve what you desire. True leaders know instead of trying to get people to come over to your camp, you should go to theirs.
Recognize and Respect Differences -It’s important for leaders to recognize differences in others and use them as a positive to the situation. As one, we are greater than the sum of our parts if we synergize together.
Communicate From The Heart – Nobody likes a phony leader, and in time these types of individuals will fail. If you truly want to lead people you must care about them and that will show through your actions.

My favorite book by John is: Everyone Communicates, Few Connect: What the Most Effective People Do Differently. I was given this book at a Leader-cast event and it turned out to be one of my favorite books of all time. If you are a owner or manager of a company and are in charge of managing people, then this should be required reading. In my experience, the main key to get employees to work hard for you is to treat them with respect and care about their life. Just the simple act of being interested in other people’s lives will motivate employees to levels scorn and ridicule can never do. The old saying, “you can attract more bees with honey than with vinegar” holds true for managing employees. Employees who feel appreciated and respected will work far harder with less supervision than those who are treated disrespectfully. If you want to accelerate your leadership skills and improve your employees productivity then I highly recommend John’s work.

If you like John Maxwell, be sure to also read our review on Tony Robbins and Steven Covey. We are sure to go over all of the most influential and favorite coaches we know and have worked with here at The Secret Law Of Attraction Coaching.