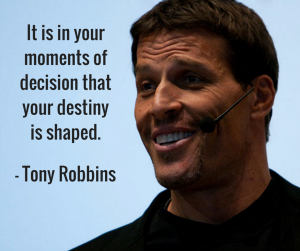 “This review contains affiliate links. I may receive a small commission if you make a purchase through them, but all opinions are my own.”

Tony Robbins is the word famous legendary self-improvement guru responsible for improving the lives of millions. When people think self-help, they think Tony Robbins. Tony has established himself as the leader when it comes to motivational speaking and success. Most in the industry consider Tony an entry level coach, but nevertheless a very important one. His teachings are primarily about increasing your personal power through positive thinking and hard work. While he does teach the Law of Attraction, it’s not something he leads out of the gate with. The Law is a higher level concept that most beginners can’t wrap their mind around, but Tony has a way to break it down in simple terms that anyone can understand.

Tony has written many best-selling books including my personal favorite Awaken the Giant Within: How to Take Immediate Control of Your Mental, Emotional, Physical, and Financial Destiny. This powerful book is the perfect way to get your feet wet int he self-improvement community. The first thing we need is motivation, and Awaken the Giant Within will give you the motivation you need. In this book he covers a variety of useful exercises and ideas that will help you grow as a person. One of my favorite things to do is to purchase audio books like this, and listen to them while I work out. It’s a very comforting feeling to have Tony as your motivational coach while you are starting a new chapter in life.

I (Seth) was introduced to Anthony Robbins just after I moved back home after college to my small hometown. Instantly, I found myself surrounded by people content on simply getting by. Naturally, I have always been somewhat of an overachiever with a firm sense that time is limited, and it must be spent wisely. I remember looking online to find inspiration when I ran into a speech by Mr Robbins. I distinctly remember he has a certain excitement about him that you don’t see in average people. Initially I was drawn to his high energy and his message of kinship with fellow dreams like myself. I was never an early morning person, by Tony motivated me to start waking up at 6am every weekday to go on a few mile jog. Every morning I would listen to a new chapter of the Awaken the Giant Within audio CD sucking up the information like a sponge. At the time, I felt as if he was talking directly to me and that we were on similar paths. Once I was completed with the final chapter I would start the book over, listening to the same lines over and over, but still learning something new each time. His words were so profound, and so deep to me at the time, it literally change my life for the better. As I’ve evolved as a person I find most of the concepts he talks about almost passé due to the fact that I practice most every day of my life. Looking back at my life I realize how far I have come with the help of personal development, and I can clearly see Tony was the beginning point of the growth. While I don’t listen to Mr Robbins anymore, the ideas and concepts he has shared with me will live on forever.

Some of Tony’s most popular works include The Following:

Now Matt has a little different story with Tony. He started off 18 years ago in personal development with Tony’s Personal Power on tape. “It was my first taste of personal development outside of books and I was hooked!” He was at one point involved with a multilevel marketing business and the coaches and trainers would go to Tony to get their wisdom. Naturally why not just go straight to the source. After the first tapes, Matt bought everything he could get his hands on that was Tony’s. “The Edge” was new back then and truly was said to have changed his life. “I listened to The Edge at least 100 times” Matt says. “Tony just had the answers to what I knew was another level in life.”

Matt even went as far to take personal coaching through Tony Robbins which in his opinion was ok. “They were ok for coaches, but compared to Bob Proctor, they couldn’t hold a candle in my opinion. ” “Don’t get me wrong as I love Tony as he got me started on the path I am on now!”Matt says.

One of Matts favorite Tony products other than The Edge, is a cd set that was mentioned above: “The Power to Shape Your Destiny: Seven Strategies for Massive Results“. Matt says that he has it on his iPod and would listen to it a few dozen times. It is so impactful as Tony talks about Goal setting in the bonus CD and how he set his first goals. He also goes into what he does to make those goals real and come to fruition. Matt can’t say enough about it!

Tony really is on another level as he works with some of the world’s biggest leaders in times of crisis. We hear about a few of them, but a lot are private. He calls himself “the why guy” not a “motivational speaker”. We people need answers, they go to him. He did a really great Ted talk that I will put below:

Tony is really the most elite and best-known teacher of personal development or self-help. Aerosmith had openly stated that “Unlimited Power” was a book that changed their life and in Steven Tyler’s top 2 books of all time. If someone is just starting off in the field, I would start them off with Tony as he can be understood and liked by so many. He can grab and captivate you like no other. You can also visit his site and find all of his current projects by following the link below:

I can’t personally thank Tony enough for my success in life. We would love to hear your stories of success with Tony as well so please share them.

“This review contains affiliate links. I may receive a small commission if you make a purchase through them, but all opinions are my own.”