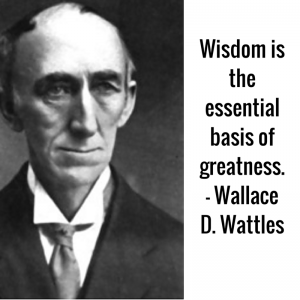 Wallace D. Wattles was a self-improvement author in the early 1900’s who wrote one of the greatest books of all time, The Science of Getting Rich. Wattles published the book in 1910 and since then it has gone on to be one of the most popular wealth accumulation books of all time. In fact, I believe this is the greatest book of all time because it’s short 17 chapters cut through the nonsense, and delve directly into the key fundamental aspects of wealth accumulation. While book Think and Grow Rich has more information, The Science of Getting Rich is straightforward and easy to follow making it better overall in my opinion. People new to the Law of Attraction and self-help field of study will be best served by reading The Science of Getting Rich first. In fact, the two books are almost identical in their point of view, it’s just one book is hundreds of pages short than the other. Wattles was born in the late 1800’s and was definitely wise well beyond his years. According to the preface, the book is based on Hindu Philosophies that say “One is All.” Furthermore, Rhonda Byrne’s life was forever changed after she read the book. With her new found perspective and vision, she went on to create the movie “The Secret” which mainlined the term Law of Attraction and the idea that your thoughts shape your destiny. In the preface of his book, Wattles explains how he has “sacrificed all other considerations to plainness and simplicity of style” and after you finish reading the book you will understand this statement. In fact, of all the books I have read on success and business, I believe this one is the most well written of them all.

Wattle’s writing style is so clear and to the point you can’t help by love reading his work. In the preface he also refers to how he procured the information for the book. He claims, through his study of the authors listed above, he has learned and compiled this knowledge. After reading a large amount of books in the Law of Attraction and Success niche you will start to notice patterns and overlap in the advice given to you. When reading Napoleon Hill’s book Think and Grow Rich you will notice the same themes discussed and conclusions drawn as The Science of Getting Rich, and the writings of Wattles. I’m not sure who developed these ideas first, but since Wattles book came out approximately 20+ years before Napoleon Hill’s book, one must assume that Wattle’s initially pioneered the work. Although, he doesn’t ever directly take credit for these concepts and says they revealed to him through studying the works of Descrates, Spinoza, Hegel, Emerson, Leibinitz, Schopenhauer, and other Oriental Philosophies. If I had to guess I would say that Napoleon Hill’s book Think and Grow Rich was a sample of Wattle’s work then expanded upon through his study of the great business leaders of the early 1900’s.

Bob Proctor also studied Wallace very intently. He has been teaching a live event for many years now on The Science Of Getting Rich. Bob puts Wallace and his book as one of his top 5 attraction books of all time. If you get the opportunity to go to one of Bob’s live events, please do so as it is worth its weight in gold.

Certain versions of Wattle’s book also include a supplement called The Science of Being Well. This super-short 17 chapter inset breaks down the fundamentals of living a healthy life. I have found that in most cases the correct way to do something is often the simplest, and nowhere is it better represented than in this short guide. The key points covered are as follows.

The Science of Being Well:

If you are looking to increase your success in life, Wallace D Wattles has written many amazing books including: