Your vibration is the source of attraction. This applies to health, wealth, success and happiness. We all use vibration every day to attract what we are currently receiving. To receive something different, you will have to change your vibration. Much like when you hear that to achieve a different result in life, you will have to change what you do. Changing your vibration is part of this equasion. To continue to do the same thing you do every day and expect a different result is defined as ignorance or stupidity. Please note, I am guilty of this all the time even now.

Let me give you an example as we have all used this in our lives to get something we really really wanted. I’ll use 2 examples, one that didn’t work and one that did to show you the difference.

At one point there was a ca

r that I really wanted. It was a 1997 Toyota Supra twin turbo. I knew everything I wanted it in, Black on black with the Targa top and 30-60k miles. Manual and fully loaded. I had pictures of the car, I saw the car in person, it was my screen saver on my phone. I imagined driving the car all the time. Now, rather than have my energy believing in I was getting the car or even have it already, I allowed excuses to come in. “Well, the insurance will cost more.” “I don’t have a garage to store it in.” “I don’t have the money.” Even when you read the words, you can feel the excitement and energy start to fade a little. This is your vibration changing. I started to look at the negative rather than believe and focus on what I could do. My spirit gave up.  Needless to say, I didn’t get the car.

There was a bike that I grew up wanting. It is a 1986 Haro Freestyle Master in a neon green. I started looking for it a few years back even though I didn’t have any money at the time, but really wanted to prove that the law of attraction and intention works. I realized after looking hard for days that this bike fully restored was not only really expensive but incredibly hard to find. 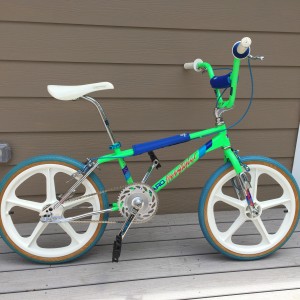 A few people had them but had no interest in selling them as they loved them as well. I decided that I was going to push on and believe that I would find it and get one. I went through the same routine, I put pictures of the exact bike I wanted up. I had it as my screen saver, I thought about and got excited about having it. I thought about how much I wanted it as a kid. I kept this up for 2-3 weeks and then I was browsing on eBay at some others bikes and realized one guy had a picture of a bike and in the background was the bike I wanted! I wrote the guy purely for fun asking if the bike in the picture was actually the right year and bike. He sent me back photos and details along with mentioning that he would consider selling it as well. I started to sweat as I had no money and didn’t want to run him around. I had to trust that it works and I would push on. He asked what I would offer him as he wouldn’t sell it for cheap and I just told him to give me a fair price and I would pay it. We found a similar bike that sold more than a year prior and based the price off of that. I was now sweating and scared, but I was focused and wanted it THAT BAD. I decided to stop saying I didn’t have the money and started looking where I could get the money. After a few days out of thin air I came up with the money and got the bike. I am looking at it and it reminds me all the time that what we teach works! (this is a picture of the exact bike as well!>>>)

Now, there are a few differences as you can see. I put a little (not a lot) more passion into the second and didn’t allow myself to be influenced by negative thoughts (thus changing my vibration). I found the thoughts and ideas that gave me excitement (positive vibration) and held onto those for dear life, even when things didn’t look possible. Now you might think, “Well, a bike and a car are much different in price so of course you got the bike and not the car.” I will tell you this, price made no difference but belief and a positive vibration made all the difference, here is way. After I failed to commit to the car I described, not but a month later I ended up buying a more practical car that cost the exact same amount and the insurance was actually more on the “practical car” after further investigation. Yet somehow I came up with the money which I didn’t have. Why? I believed the practical car made sense and I never thought negatively about it. What did happen later in life was regret for not going after what I really wanted. I absolutely could have had it had I gotten past the excuses and negative thinking. The negative thinking put me into a negative vibration and killed the attracting power I had for the car. Instead I thought sensibly like many of us do, put myself into a sensible vibration and got just that for the SAME PRICE!!! We rarely stop and question our actions to see if they are valid. We have so many performed excuses in our heads that prevent us from getting what we want.

I could have easily done the same with the bike but chose not to so that I could prove a point. It was actually harder coming up with the money for the bike than it was for the car due to my life and the stage I was in.

Beliefs and thoughts help create your vibration which in turn attract or repel what you want or worse yet, what you don’t want. We walk through the steps to this process in our Free 30-day e-course if you haven’t gone through it yet. I would highly suggest that you take a look.[/vc_column_text][/vc_column][/vc_row]